The Story of Your Heart 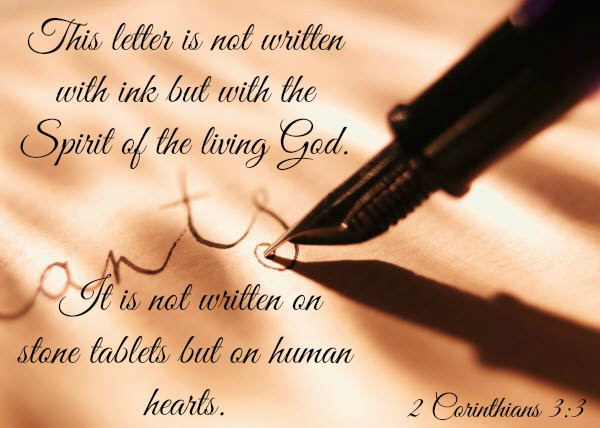 The Bible says in 2 Corinthians 3:2 that we are living epistles, known and read by all men – living letters that tell the story of what has been written in our hearts.

As you live life, your thoughts, words, and actions are writing a letter that men around you are reading! So what is your letter saying to them? How do your thoughts produce words and actions that reveal the “true” Jesus to the world around you? God wants us to reveal His image, His glory, and His love to those we are around daily. This does not just happen by supernatural power, gifting, great faith, or anointed teaching, but by living a life of godly character EVERY DAY!

God wants us to grow up! He does not want us to remain spiritual babies forever. I have a toddler and a 7 month old. They are so cute, even when they drool, crawl on the floor, cry, spit up and make a mess in their pants. I also have a 20 year old son, and let me tell you, if he was drooling, crawling on the floor, crying, spitting up and messing his pants, I’d be organizing an intervention! Grown ups don’t do that!

When men and women come to God, and surrender their lives to Him, they are born again. It’s not a natural birth, but a spiritual one, and spiritually speaking, they are brand new babies. They need a lot of care and attention to grow up strong; however, they are expected to grow up.

Part of growing up is developing godly character, and this has everything to do with the heart. We can take care of the outward sins (think drug abuse, sexual sin, etc.) – but God sees the heart of a man, and that is the most important area to focus on if we are to grow spiritually. Some people can appear spiritual outwardly, but inside their hearts are filled with bitterness, pride, covetousness, lust, selfishness, a critical and judgmental spirit, hypocrisy and the like. Jesus is a lot more concerned about these things than he is about someone having a glass of wine!

If your life is a letter to the world that tells them who Jesus is, then your character and heart are the sentences and paragraphs that make up that letter.

“Writing a good letter” will not only help you personally, but it will help those around you who need to get lost in a good book! Your excerpt should entice them to read more, and as they do, you can introduce them to the Author and Finisher of your faith – Jesus! After all,

“Christ himself wrote [this letter]—not with ink, but with God’s living Spirit; not chiseled into stone, but carved into human lives—and we publish it.”

Let’s take a quick look at one heart condition that will ruin your love letter, and have people boycotting your book before you can ever get them to page one!

Hypocrisy is defined as: a theatrical performance, pretending, acting dishonestly, not being real or genuine.

If you read the Gospels, Jesus was always quick to forgive the repentant sinner, and had great compassion on unbelievers. He did not condemn the woman caught in adultery, He ate with tax collectors, and drunks; yet, when he spoke to the Pharisees and Sadducees, and exposed their hypocrisy, he always rebuked and corrected them sharply! On the outside they looked good. They quoted Scripture, prayed, studied, gave of their tithes, and followed the law, but on the inside Jesus said they were, “…full of dead men’s bones.”

“Beware of the religious scholars. They like to parade around in long robes. They love being greeted in the marketplaces. They love taking the best seats in the synagogues. They adore being seated around the head table at banquets. But in their greed they rob widows of their houses and cover up their greed with long pretentious prayers. Their condemnation will be all the worse because of their hypocrisy.” ~ Luke 20:46-47

Part of growing in godly character, and growing closer to God is to learn to love what He loves, and hate what He hates. God does not like hypocrisy, and in my experience, hypocrisy in God’s people is one of the main things that keeps people away from God, and away from church. There is so much in this world that is false, fake, counterfeit, unreal, and insincere – even so called “reality” shows are not real! The result of living within this culture of lies is a people that are suspicious, cautious, and skeptical – their hearts cry out for something REAL, something TRUE, something GENUINE and lasting. They want your letter to be NON-FICTION, and the good news is that it IS!

My challenge to you: Don’t wear a Christian mask. Be real with God and man. Bring God your rough draft no matter how rough it is! Let Him erase a few lines in your letter, edit the typos, and rewrite the story of your heart. In time, you just might become a “Best Seller.”