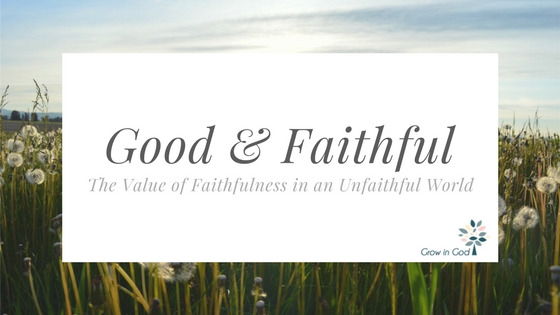 “Well done good and faithful servant…” these are the words that every believer wants to hear from the Master when He returns and we give an account of what we have done with what He has given us. In the Parable of the Talents in Matthew 25, we read of a master who gives instructions to his servants before departing on a long journey:

“For the kingdom of heaven is like a man traveling to a far country, who called his own servants and delivered his goods to them. And to one he gave five talents, to another two, and to another one, to each according to his own ability; and immediately he went on a journey.” Matthew 25:14-15

A talent was a weight, or a sum of money, but it is appropriate to see this talent as a resource in a person’s life (time, money, ability, authority). The story goes on to reveal that the first two servants felt the responsibility of their assignment and went to work without delay. They used what had been entrusted to them, and gave the master a return on his investment. We read of the 3rd servant that he was afraid and went and hid the talent entrusted to him in the ground. At the very least, he did not lose what was entrusted to him, but he only gave his master “what was his” and no more.

“So he who had received five talents came and brought five other talents, saying, ‘Lord, you delivered to me five talents; look, I have gained five more talents besides them.’…He also who had received two talents came and said, ‘Lord, you delivered to me two talents; look, I have gained two more talents besides them.’

It is good to note that both servants received the same reward, even though they were given different measures, or weights, of responsibility. They both heard equally:

‘Well done, good and faithful servant; you have been faithful over a few things, I will make you ruler over many things. Enter into the joy of your lord.’

Note also that each servant gave an account individually. As a group they would have done well – 8 talents given, 15 returned; however, each ONE gave his own personal account before his master.

“Remember, my hearer, that in the day of judgment thy account must be personal; God will not ask you what your church did – he will ask you what you did yourself.” (Spurgeon)

Much to the third servant’s surprise, he was not commended for returning to the master what belonged to him. He seemed to believe – because his master was so powerful – that he didn’t need his help. With boldness and perhaps even pride he says to the master, “Look, there you have what is yours.” He seemed to have no idea that his master expected a return on his investment – at least some interest!

As we finish out the parable we see that the third servant was deemed to be “wicked & lazy,” or unprofitable & unproductive. He received no reward from his master, but rather what little he did have was taken away. His fears and assumptions were no valid excuse. He was afraid but his fear was misplaced – He should have feared God rather than fearing risk or failure.

Every time I read this passage it is sobering to me. We don’t have the luxury of not using what God put in our hands. We all want to hear, “Well done.” We all want to hear, “Good and faithful,” when the Lord is addressing us, but we often let our own fears and assumptions about God’s greatness and our “smallness” deter us from fully developing in the gifts and graces He has entrusted to us. Saying, “I was afraid,” is not a valid excuse! Fearing risk or failure rather than God will only lead us into being unprofitable and unproductive, but we are called to live lives that bear much fruit!

Listen, the qualities God is looking for are goodness & faithfulness. He didn’t say, “Well done thou mighty and anointed man of God.” Nor did he say, “Well done thou popular and well recognized Christian celebrity.” No, no – He is looking for faithfulness. He simply wants us to do something to serve Him with what He has given us. It might be serving in your church, raising up children in the spirit of faith, running a profitable business that advances His kingdom, or painting, dancing or performing for His glory. Whether He has given you 1 talent, 2 or 5 – give Him a return on His investment! Bear fruit with what seed He has given you!

In a very unfaithful world, God sees and recognizes and rewards FAITHFULNESS! What is the weight or measure He has entrusted to you? USE IT for His glory, and live excited for the day when you get to stand before Him and hear, “Well done.”