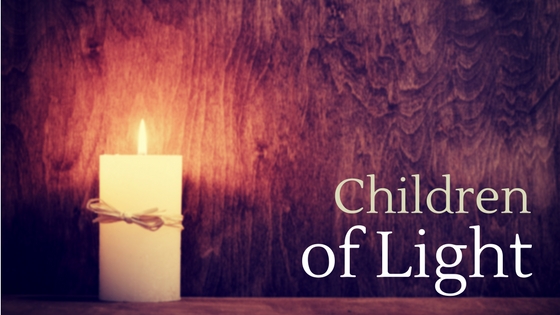 Have you ever wondered why the grand battle between good & evil, and light & darkness dominates so many story lines and movie plots? Why are we drawn to these epic clashes between heroes and villains, ultimately hoping that the “good guy” wins and saves the day? I believe it is the internal awareness that there truly is a battle of epic proportions being carried out on the world’s stage, and it is the battle for the souls of men and women. There really is a war between light and darkness. Of course, we know that Jesus has already triumphed over evil through the cross. The Light of the World spoiled all the plans of the rulers of darkness…

“Having disarmed principalities and powers, He made a public spectacle of them, triumphing over them in it [the cross].” Colossians 2:15 (NKJV)

Though the light (Jesus) came into the world and exposed the works of darkness – indeed it was His mission to undo the works of the devil by healing all that were oppressed by him (Acts 10:38) – many remain in darkness, having loved the darkness rather than light. (John 3:18-21)

For all of those that believe in Jesus and receive Him, to them He gives the right to become the children of God. When we hear the anointed truth of God’s word and faith comes, and we believe on Jesus, we become God’s children – children of light. We are called the “light of the world.” We are exhorted to “let our light so shine before men” that they may see our good works and glorify our Father in heaven. We are called “children of the light and of the day.”

“…among them the god of this world [Satan] has blinded the minds of the unbelieving to prevent them from seeing the illuminating light of the gospel of the glory of Christ, who is the image of God.” 2 Corinthians 4:4 (AMP)

So what is this battle about? It is about BELIEFS. What will you believe. Notice Satan has blinded the minds of the “unbelieving.” What do these people “not believe?” It is the gospel, or the “almost too good to be true news” of the glory of Christ. The light comes to reveal and expose TRUTH, but the darkness is here to mask and hide the truth so that people believe LIES. In fact, the principalities & powers, the rulers of the darkness of this age have a commander, and he is the “father of lies.”

Have you ever wondered why it seems that some people have a supernatural stupor over their minds? It seems that they are completely blind to some things that may seem like common sense to those living in the light of truth. There is a scriptural reason! The Bible says that the whole world lies under the power or influence of the evil one:

So how do we win this war? How do the “good guys” (God’s sons, soldiers and servants) carry out His mission to seek and save the lost, to set the captive free, to open the eyes of the blind, and heal the broken hearted?

We must be children of light! What do I mean by that? It is our mission to be ambassadors of the kingdom of God, to be “ministers of reconciliation.” We do this by “proclaiming the praises of Him who called us out of DARKNESS into His marvelous LIGHT.”

We must bring the light of God’s truth into every fiber of our being. We must live in truth, walk in truth, share the truth. We are living epistles known and read by men! Wherever we go we bring the light with us, and it only takes a tiny bit of light to chase away a whole lot of darkness.

Now, I’m not talking about beating people over the head with your Bible, or quoting scriptures to them all the time, or telling them that they are living in darkness and sin. I am talking about being a vessel that carries around the glorious goodness of God. We proclaim God’s praises by being thankful, being kind to others, walking in love, being forgiving, and sharing God’s goodness through our words and actions. When there is an open door, we invite people to come into the light with us, and to taste and see that the Lord is good! Hallelujah!

Let’s WAKE UP, redeem the time, and be the light of the world. The souls of men & women hang in the balance!